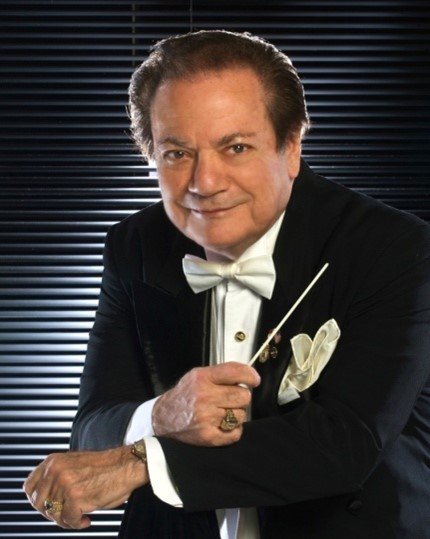 Maestro was born in Panama in a bilingual home—his mother born in Colombia and his father a member of the United States Armed Forces. He received his doctorate in Opera Conducting and Musicology from Washington University in St. Louis. Maestro received personalized coaching  on the music of Bach under the baton of the great Pablo Casals. Additional studies were with eminent conductors Leonard Slatkin of St. Louis Symphony and the National Symphony Orchestra; Ignace Strassfogel of New York’s Metropolitan Opera and Richard Karp of Pittsburgh Opera. Their mentorship is evident in Maestro’s founding of the Augusta Opera with singers from the Metropolitan Opera, Chicago Opera and London´s Covent Garden, receiving critical acclaim from Pittsburgh Post and Opera News Magazine. His musicianship is acclaimed as “Dynamic…exciting…and remarkable controlled, but simultaneously free spirited.”

Maestro was honored at Washington´s Kennedy Center with the Hispanic Heritage Foundation´s Award for the Arts in recognition of his lifelong work as a world-renowned conductor and his dedication to promoting classical music to youth around the world.

Maestro received the Critics Choice Award at Brazil´s famed Villa Lobos Festival in Rio de Janeiro. He is a proud recipient of the distinguished 2009 Amigos Award from Hispanic Unity of Florida., and praised as an “Ambassador to Latin America for his exceptional musical talents and diplomatic skills.” by Ronald Reagan,

When Maestro arrived in Florida in the early 1970’s he immediately got to work, sharing his vast knowledge with Florida students. He taught at the middle and high school levels in Pompano Beach then at Florida Atlantic University, creating student orchestras (award-winning at the national level) and the Florida Atlantic University Symphony, hosting internationally acclaimed classical and jazz guest artists as YoYo Ma, Hank Levy of the Stan Kenton Band, Vovka & Dmitri Ashkenazy for masterclasses and joint performances

In the 1980’s Maestro founded the Florida Chamber Orchestra, which became South Florida Symphony. Twenty years later he founded the Florida Music Festival and its outgrowth, Symphony of the Americas – now a Broward County designated Major Cultural Institution, with its performance home at the acclaimed Broward Center for the Performing Arts.

Maestro established the Symphony’s annual music festival, Summerfest, in 1992, bringing its fine artistic reputation to diverse audiences and schools in great cultural capitals as well as rural areas of the world – hosting an internationally acclaimed foreign chamber orchestra joined by Symphony of the Americas musicians as a cultural exchange presentation taking place in Europe, Florida and the Americas. Summerfest outreach performances have taken place in every country of Central America, four countries of South America and five islands of the Caribbean.

As a Rotarian, he instituted a joint project with Rotary and Sister Cities International taking Symphony musicians to Haiti. A humanitarian tour through music, the project raised over $50,000 through performances in cities and hillside churches, for potable water efforts and re-forestation.

Chosen for a grant from the US Embassy in El Salvador, Maestro proudly led the “Friendship in Action” mentorship project with Symphony of the Americas musicians and the Don Bosco Youth Orchestra in several coaching residencies in San Salvador in 2017. Masterclasses, rehearsals and side-by-side concerts throughout the country gave these young musicians the opportunity to perform music of Americas composers for the first time.

Maestro’s NPR featured recordings on the program Compact Discoveries have been aired on national public radio throughout the US, Haiti, Puerto Rico and Canada. His thirty-two compact discs with international orchestras are with Pickwick Records- London under the Hallmark and Orchid labels as well as the Symphony of the Americas own label, and feature a diversity of works from Crazy for Gershwin and Hollywood Favourites, to Piazzolla tangos, and classical chamber music.

Back to Leadership Page