« Musician with immense impetus, he is not afraid to immerse himself completely in what he is interpreting…» 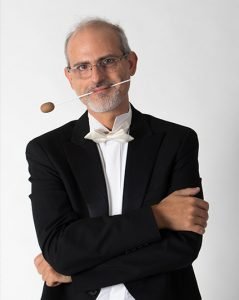 He has a strong experience as an orchestra conductor, by being since 1998 the musical director of the Mont Blanc Choir and Symphony Orchestra (France), and since 2008, the artistic director of the Musicfor international. In 2003, he became the Opera Italiana artistic director, realizing several operas by Rossini, Verdi, Donizzetti etc. These experiences will lead him to perform in many festivals in Europe but also in Africa and America. Among others: Plovdiv the European Capital of Culture 2019 (Bulgaria), 43rd , 8th and 7th Cantiere Internazionale d’Arte (2018 – Italy), 9th, 6th and 3rd edition of Festival International de Versoix (2017/2014/2011 – Switzerland), Constantine Capitale de la Culture Arabe (2015 – Algeria), Alba Music Festival (2013 – Italy), 13th   and 12th    Festival du Baroque (2010 – France), Festival Thessaloniki (2002 – Greece), 2nd Festival International de Nice (1996 – France). Besides, he participated to several Summerfest in Florida with the Symphony of the Americas (2010/2012/2013/2014/2016/2017/2018/2019) as composer in residence, conductor and soloist, the Congress of the United States of America recognizes him musical and artistic merits.

As a complete musician, he is mastering a vast repertoire, and offers programs ranging from the Baroque era to the music of the 21st century. His musical studies and background made him mastering all the major styles of the music repertoire, from the French style, to the German, Italian, or Russian style. Among his most outstanding concerts is the inauguration of an important series of concerts for the Holy Year of 2000 at the Vatican playing for the Pope John Paul II. He has also played under the baton of Maestro Carlo Maria Giulini, collaborated with Maestro Claudio Abbado and has given concerts with Luciano Pavarotti. He gave recitals for the Chamber of Deputies (Rome – Italy), but also held numerous conferences including the one at the Ministry of Foreign Affairs (MFA-2012) and seminars, such as the one at the Italian Diplomatic Institute (MAE-2013).​

Concerning his musical training years, he graduated in piano, composition and orchestra conductor at the Music Conservatory of Turin (Italy). He studied piano in Rome (Italy) with Debora Varesco and furthered his studies in Russia at the Rachmaninov Musical Institute with Viktor K. Merzhanov. Spotted as a unique talent, he won two scholarships, which enabled him to go deeper into pianistic technique at the Lausanne CIEM-MOZART (Switzerland) with Fausto Zadra.  He has received valuable coaching from Gyorgy Sandor, Franco Scala and Paolo Bordoni.  In 2000, with Dominique Weber as tutor, he won a first prize in Piano Virtuosity with distinctions at the Sion Music Conservatory (Switzerland). He is also enriched by studying the composition with David Graham and Hans Werner Henze, who will encourage him to continue his musical studies, by helping him with financial scholarship. Eager to have a global vision of the music, he studied conducting, counterpoint, instrumentation and analysis at the Haute Ecole de Musique de Genève (Switzerland). At the same time, he participated to the conducting classes given by Roberto Benzi and Ernst Shelle.

Besides his personal musical career, wanting to expand access to music for everyone, he immerses himself in the humanitarian sphere, thanks to the international organization Musicfor, principally based in Italy, Switzerland, France, and England. In 2017, the world renowned organization UNICEF offered him the Baton for Peace, symbol of his humanitarian commitment. Through Musicfor, he devotes much of his musical activities to the development and the support in the most disadvantaged areas in the world (Mozambique, Haiti, Angola, Ivory Coast and South Africa…), planning music schools and youth orchestras. Thousands of children have thus the opportunity to approach music and broaden their perception, and their perspective on life. He is also passionately dedicated to teaching music, and his great pedagogy and devotion made his pupils win international music competitions.